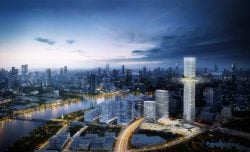 Keppel Corporation made the disclosure on Monday evening, saying that Keppel Land has signed a sale and purchase agreement with Pham Quang Hung, a shareholder of QLP, for the divestment.

The purchase consideration will be paid in cash. The sale is expected to be completed by the end of June 2018, and Keppel Corp expects to recognise a gain of about S$13 million from the divestment.

Keppel had acquired a 20-per-cent stake in QLP in March 2016 for about S$20.3 million, before topping it up by another 25 per cent for about S$25.6 million in September that year.
On a pro forma basis, had the divestment been completed at the start of 2017, the earnings per share for FY2017 would have increased from 11.9 Singapore cents before the divestment to 12.7 cents after. Shares of Keppel Corp closed 10 Singapore cents higher at S$7.15.
Tags: apartment, district 2, foreigner home owner ship, foreigners, investment, news, real eastae, singapore, sonkimland, thu thiem, Vietnam